What A Stupid I Am 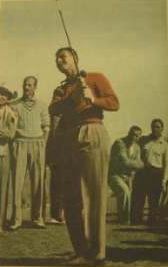 Roberto DeVicenzo. To refresh everyone’s memory, DeVicenzo said this after signing an incorrect scorecard that cost him a spot in a playoff with Bob Goalby for the 1968 Masters championship. Tommy Armour had recorded a 4 for DeVicenzo on number 17 when he’d really made a 3, and DeVicenzo didn’t catch the error.

Lately I’ve been feeling a bit like Roberto, although my stupidity doesn’t have nearly the same consequences as did his.

After a stretch of the best golf of my life, I decided to make some changes to get even better. (Laughing, catcalls, and jeering are quite appropriate here.) I particularly thought I needed to be sure I minimized my chances of coming over the top. That’s been a recurring problem for me, although there was no good reason to think it was causing me a problem at the time. It was just to be sure, you know. That extra dose of medicine.

So I broke my own rules and made the mistake of listening to what commentators and golf tips people said. I settled on two things, both of which seemed plausible based on my swing history. I tried to flatten my swing out a little, a la Matt Kuchar, and I tried to slow down my transition. I’ve always been at risk for a quick transition, although I actually play best when I find a quick, but not too fast, tempo. A pro once tried to slow me down and then decided quicker was normal and better for me.

The end result was I lost my tempo and my ball position. My ball striking went down the tubes. I’m hitting everything on the heel, and shanks are a real risk for the first time in my life. I’ve never been a natural draw player, but now I can’t get any draw at all. I’m coming over the top more than I have in a long time. I have no balance.

I’ve been slowly recovering, and feel like I may be getting close again, although my scores haven’t yet caught up. My tempo isn’t natural yet, but I’m getting glimpses. My swing did flatten a bit and my arms are better extended. That’s probably what is making me hit it in the heel, and I need to get comfortable standing a little farther away from the ball at address. I used to stand too far away, so that’s a challenge.

Anyway, I may have learned my lesson (again). I like the Golf Channel and Golf Digest, but listening to the tips they give has always screwed me up. I guess I was looking for that one little extra thing to get me over the top. That pun was accidental, but is an entirely appropriate ending.