Patience in golf really does pay

Posted on November 6, 2015 by Charles Prokop 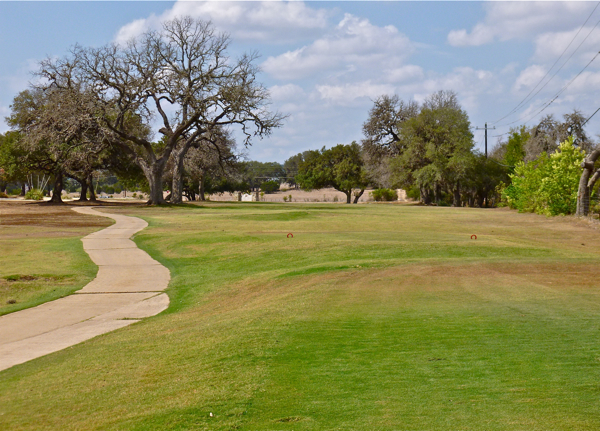 A few years ago I described a hole at my home course that I played contrary to my typical style. (Reprinted here.) I used a “hit it and hope” approach because there didn’t seem to be any smart strategy, at least not one I was capable of executing. The photo above shows the hole. That line of trees down the left side made it next to impossible for me to hit a drive into a spot providing a reliable shot into the green. The hole doglegs left at the end of that line of trees.

The target spots in the fairway were just too small to hit with any consistency, especially with hard ground and a slightly downhill/sidehill fairway. I needed a career drive to hit it all the way into the dogleg with a clear shot at the green. On the few occasions I managed to hit a drive that far, half of the time I hit into the fairway bunkers guarding the far side of the dogleg. I wasn’t the only player with that problem. Everyone I knew had chosen some odd way to play the hole, including hitting it across the rough and waste area to the left into the adjoining fairway.

Now several years have passed and it’s an entirely different hole. We’ve had an extended drought. The trees were already suffering from oak wilt, a fungus spread by beetles that is usually fatal for live oaks. That’s why the trees look so leafless in the top photo. The drought stressed the trees past the point of no return, and they have now been removed.

The photo below shows the new hole, sans trees. You’ll also notice that we’ve had some rain and the grass is greener. The shot is taken from the same spot as the top photo; you can see the twists and turns in the cart path and other features that are duplicated in both shots. But, as you can see, it’s an entirely different hole. It’s now possible to hit a drive down the fairway and count on a shot into the green, assuming you can stay away from that grove of trees down the right side. It’s a fair hole now. It’s easier, but it’s also fair.

They always say you need to be patient in golf, but I’m not sure they mean to be this patient. On the other hand, I guess if you are patient enough you can out-wait trees. I wouldn’t recommend it as a regular strategy, though. Your pace of play would be way too slow.