A Lesson With Professor Obvious 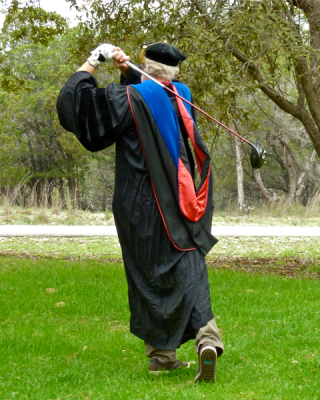 A few months ago I posted some data about correlations between my golf scores, total putts, and greens in regulation (GIR). I found that my score was highly correlated with my putting, less (but still significantly) with my GIR, and my GIR and putting weren’t correlated.

I think this is largely because of the time of year and the way my game has been suffering. When I was playing well (handicap index between 6 and 7), putting was king. I was putting well, the greens were running well during the spring and summer, and the world was a happy place. This winter the greens have been slick and hard, I’ve been playing poorly overall (handicap index between 10 and 11, going down now to 9), and I’ve had more blow-up holes that boost my score. (And yes, I use equitable stroke control figures.) I’ve become well acquainted with double bogey when he formerly was a casual acquaintance.

One lesson I’ve drawn from this is when you’re playing poorly overall, it doesn’t much matter what part of the game you work on. Getting better anywhere will help. It’s hard to recover from out of bounds drives and shanked irons, no matter how well you putt. As Jerry Reed famously said, “When you’re hot, you’re hot. When you’re not, you’re not.” But when you are keeping it between the fences and hitting most of your irons OK, the short game is king.

Just out of curiosity, I developed a hybrid index of my quality of play by totaling GIR and fairways hit and subtracting that from total putts. The lower this number is, the better I’m playing. Maybe driving and irons play is saving bad putting, maybe it’s the other way around, maybe everything is roughly equal, but the lower this index is, the better I’m striking and holing the ball. In fact, this index correlated with my total score better than any single factor, with a Pearson r of .78.

“Yes, you on the back row. You have a question?”

“Professor Obvious, are you saying that the better you play, the lower you score?”

“Um, I think you may be oversimplifying things there, you know it’s a very complex game and the equations are, um… . Let me get back to you on that. Tomorrow, I’ll show you my new invention. I call it the wheel.”

“Is that all, Professor?”

(Photo of yours truly by Loretta Prokop)

3 Responses to A Lesson With Professor Obvious