I was watching the Shell Houston Open on Friday, and the announcers were discussing Phil Mickelson’s improved putting. He has improved remarkably, going from way down in the putting rankings to near the top. In the course of this discussion, they also mentioned his winning record, and that he is the only active PGA player to have won in each of the past 9 years. One of the announcers then said, (I swear this is the truth. It’s not an April Fools’ joke.) “Phil has been a model of consistency.” 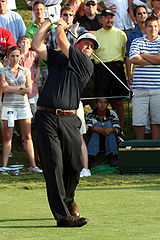 I’m a big fan of Phil. I love his game, the things he does for charity, the balance he maintains between family and profession, the grace with which he deals with adversity. But this is the same guy that inspired “What will Phil do next?” His winning record is very impressive, and consistent in its own way, but Phil as a model of consistency? Let’s take a vote.

As if to illustrate that model of consistency, Phil showed up with a different putter on Saturday after putting so well with the old one for the past several months. He then missed a two footer for birdie with that new putter.

The announcers (NBC this time) were discussing his generally excellent play in Houston and observed that his play this week is not at all predictive of how he’ll play next week in the Masters. Model of consistency. Sure.

Phil, I hope you win in Houston and take home another green jacket next week. I wish you were a model of consistency, but then again, you wouldn’t be Phil.